Sword. Chucks. You know, like nun-chucks, but all sword? Eyup… that’s what he just said.

These days, I am very proud to say that I was there when the amazing 8-Bit Theater webcomic (I consider it the king of webcomics… well, granddaddy king) introduced the idea of sword-chucks. I laughed like a madwoman when the overly-typical melee character, named Fighter of course, announced that it would probably be a good idea. Probably?! 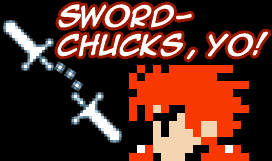 Ahhh, 8-Bit Theater. A truly exceptional rabbit hole to find on the internet. What-it-is? A very, very good parody of  Final Fantasy and many other 8-bit video games. But 8-Bit Theater isn’t just that. I loved the dark humor and blatant slapping around Brian Clevinger did of his own characters (I think I enjoyed Red Mage’s horribly embarassing misadventures with 20-sided die the best). And other than being straight up, effing funny… this webcomic had a pretty great plot.

I remember taking study breaks (really procastination breaks) clicking through as many 8-Bit Theater comics as I could in college to read, and re-read some of the worst shennanigans of the Light Warriors. And Clevinger kept it clever. An incident with a pirate named Bikke, a bunch of cheetoes and a scurvy epidemic… Evil Princess Sarah explaining to Garland how he should have captured her… uh… and I remember something else about Black Mage needing, very badly, to kill Fighter who always emerged cheerfully from his homicidal best-friend’s antics. 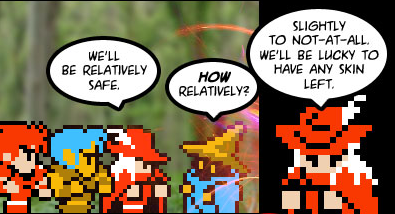 And then, oh God, that time they all got upgraded, but Black Mage had the worst, THE WORST, armor upgrade I have ever seen in a video game. Ever. And I played Warcraft back during the Burning Crusade, if you don’t believe me…

At the time that Brian Clevinger was still making 8-Bit Theater, I was still pretty unfamiliar with 8-bit games, even though they were straight from my era. But evenso, I was determined to follow along, giddily desperate to get all the hilarious references. Actually… sound familiar?

I highly recommend reading 8-Bit Theater. I did a little research to refresh my memory for this post, and I was excited to learn that it won some webcomic awards, too. I guess I shouldn’t be surprised! These days, it is an insanely delightful throwback. A nice reminder of all the greatest tropes of hack-and-slash video games, most especially the 8-bit ones.

I thought about saving this one for the Old school, Rad, Borrowed and Bad series, but who has time for that?! 8-Bit Theater is so fun to remember, and the YouTube fan-made video of their D&D session was the -very- best. I found out the soundtrack is from the Dead Alewives, a Milwaukee-based comedy group. And, I almost forgot that Clevinger made an animated series (see the Bonus Challenge below), so you can even watch some of what he did. I really think he is a talented writer. It’s dangerous to go through college and be in breathless hysterics for as long as his webcomic got me to… how did I pass my classes and not pass out on the floor…?

So, load up the cup-o-noodles, some Mountain Dew, strip into your skivvies and enjoy a few hours of shameless webcomic readin’! Or… watchin! Yaay!