Don’t want grapefruit to get it on with nobody else but me!

I have secretly loved a few really luxurious grapefruit-inspired products over the last few years, and it wasn’t until I really gave Miike Snow’s Genghis Khan another good listen that I realized I’ve developed an intense hot-and-cold obsession with grapefruit. I even resisted telling any of you out there on the internet. I kind of don’t want you to love my top favorite grapefruit body wash, recipe, grapefruit and grapefruit accessories the way I do. But it’s spring, and grapefruit fits in perfectly because it’s just as refreshing. Finally, it’s time to tell-all. 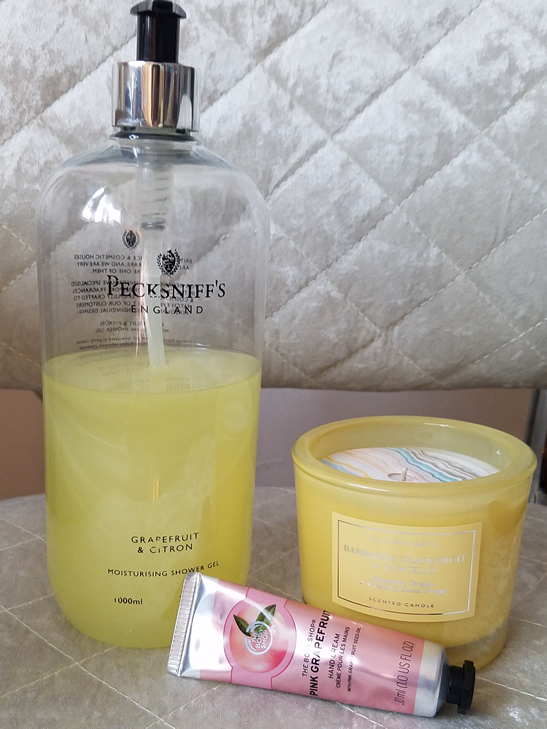 So… two things. First, I realized, kind of later in life, that I really, really adore grapefruit. But it wasn’t always that way. Palates change through life and I had to mature into this one. As a kid, I liked bananas, I always loved strawberry jam. After college, I came to crave pineapple, later blueberries… I feel pretty partial to all those. Grapefruit, however, creeped up on me after, believe it or not, a body wash I found at Marshall’s one time. (More on that later…) Ever since then, I’ve had grapefruit at the back of my mind, kind of like an ex lover. I don’t… really want it. I know that I adore it if I get next to it, smell it, see the golden rind and the ruby fruit all over each other, in a bowl together. But then, when someone else mentions that they like grapefruit… Often, people do that a little sheepishly, a kind of shy confession with that tone of voice, you know the one, ‘Oh, he’s okay…’ or worse, ‘Grapefruit is a nice girl, I guess…’ I get a little bit Genghis Kahn.

Like? Just like?! You don’t just ‘like’ grapefruit. Grapefruit isn’t ‘just okay’—it’s a really special fruit, alright? Don’t talk about it like that. It’s got this super-fresh, sensual aroma, those colors… and then the tart, yet sweet tangy taste… amazing. Feel it over your skin as a lotion. Labor for hours, scraping the rind and boiling it down, dipping it in warm melted chocolate for home-made candy everyone loves. Take a shower in it, ho my God… Grapefruit! Nobody loves grapefruit like me! Whenever someone doesn’t express an equal, well, reverence for grapefruit, I hear that obsessive Genghis Kahn-like voice in my head as I recall all my most fun experiences with some of the most tantalizing grapefruit products I’ve discovered and secretly luxuriated in over the years, and I just feel, well, jealous. Out of sight, out mind sometimes, maybe, but, still… Nobody loves grapefruit the way I do. We have a kind of hot and cold, passionate affair that only Miike Snow would understand…

My second point—I have this weird habit of only finding out about very cool songs after a year or two. I blame the way I listen to music on YouTube. It takes a long time for something like Miike Snow’s Genghis Khan to surface after I keep clicking over to Steam Powered Giraffe’s electronic harmonics. (Actually, I think it was a craving for Mystery Skulls that finally brought it up…)

Whew! Alright, we’re nodding back and forth and singing along the wrong lyrics, an’ everythaaang… time to start this up.

Dip in When You Need

Pecksniff’s England has the best grapefruit body wash, Grapefruit & Citron Moisturising Shower Gel. (And if you can find a giant glass bottle of it with a black tassle around the neck, you’ve pretty much won shopping for the day. The bath soak version looks so sexy near the bathtub, it’s worth treating yourself.) Dip your whole body in there when you need, seriously. I found my first bottle at Marshall’s, the bathwash that started my grapefruit obession. Sometimes, they must have older stock or something similar because the quality of the bottles isn’t consistent. I recommend a fresh bottle if you want to fill up your shower with hot steam, the thrilling scent of grapefruit all around you, and the sensation that you are bathing actually inside of a grapefruit. It isn’t super-sweet and it isn’t perfumey. It’s just grapefruit the way you know you gotta have it.

A tip: Keep the black bottle pump clicked over to the closed position when you’re not using it. The grapefruit magic inside is so lovely, I find that it attracts things as if you’ve left a real grapefruit, unwrapped, on the bathroom counter.

The Right to Ask Where You Go at Night

Sure. I hear you, a lover may need to know this. But—if you put on my favorite pink grapefruit lotion, they won’t have to ask. It’ll be so easy and soooo much fun to follow the lovely aroma and find you. Or, even while you’re both in the same dark room.

Alright, before we go too far down the road here with this sensual theme… this is the lotion. Pink Grapefruit Hand Cream by The Body Shop. 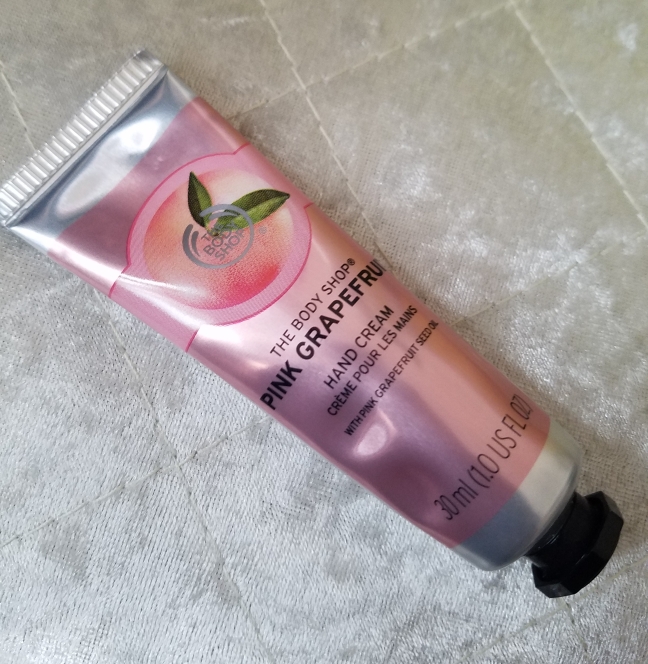 I had the most fun buying this in the store. The ladies at the Union Station (Washington, D.C.) The Body Shop were really nice, we had the best conversation and I actually did enjoy trying all the different scents they had available this season. Normally, I’m a pretty guarded shopper and don’t like to be talked into things, but it was a fun experience. I also highly recommend the Fuji Green Tea Body Butter. Any form these The Body Shop lotions take is perfectly pleasing. I got the little pocket-sized bottle so that it fits in my work bag, but I can’t imagine my green tea lotion in any other form than a shallow hand-held container that I get to unscrew in the evening and rub onto my hands and relax with before dreaming.

And the Lights, They Glow

Feel like you just lost the World War? Well, you clearly need to relax. The Illuminaria Barbados Grapefruit & Tangelo Scented Candle (that’s “Grapefruit, tangelo and a touch of sweet orange”) is going to be your best friend. I found this one at the Nordstrom Rack in Friendship Heights after being really resistant to a lot of more sugary scents on the… uh… rack. Near the register. 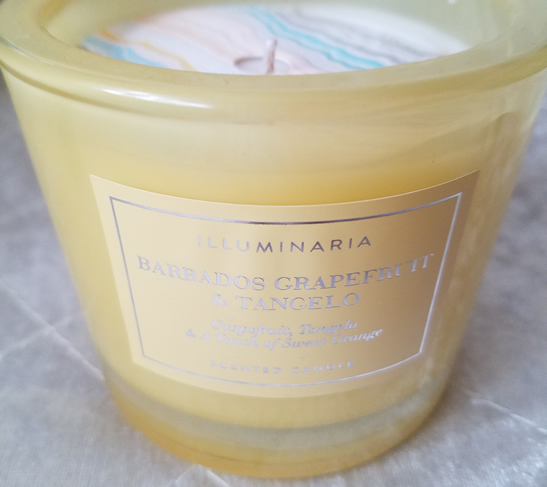 When I was buying this, the check out girl got really thrilled and asked me if this was -the- grapefruit candle. So, this one already has the ladies pretty excited. And when I got my baby home? I’m picky about scents, I don’t want my house to smell like perfume. Otherwise, I’d spray it myself with the bottles I already have. But a light scent that makes you feel like you’re away on vacation or lounging on your bed, in a cozy, fruity ruby and gold fantasy? Oh, yes. Grapefruit… don’t get it on with nobody else but me…

Yeah, hopefully, this post hasn’t become obscene yet. But, it’s about to.

So, I can be just as lazy as the best of us humans, but sometimes I go into this mode where I don’t mind an obscenely intense cleaning or cooking or sewing or crafty Little House on the Prarie moment. A few years ago, I found this recipe for home made grapefruit candy, dipped in sugar or chocolate. I was looking for it in the first place because I liked my grapefruit so much, and I was buying a lot of it, and I was also starting to feel guilty about just throwing away all those rinds.

It’s actually not a hard recipe, you just have to be okay with scraping, slicing and then boiling the rinds a few times in the kitchen in your big pot. That’s it. Other than that, it’s dipping very sweet-smelling grapefruit in tasty things…. Oh, it’s so nice. It’s almost wrong. And then in warm, buttery melted chocolate, too. Or rolling around in beautiful pink sugar… The two of you together… you’ll want to make up your mind whether or not this is wrong, but you won’t know yourself. Until you’ve tasted it.

Remember, this is pretty much a hard core bonus challenge for those who have a strange need to get really intimate with their favorite fruit, then master it!

Some tips: They talk about tempering the chocolate, but I just put it in a small pan and let it rest in another larger pan of simmering water (a heat-resistant bowl over the large pan might work too) and watched it melt. I hear that’s how you’re supposed to melt chocolate if you’re not using a microwave anyway. I have a hard time with making sure it doesn’t burn in the microwave.

Also, I freeze my rinds in the syrup that comes from boiling them, then defrost and dip them in chocolate right before going to a party, to share with everyone. I’m not a good enough cook to know how to stop them from melting on the way over, so I use freezer paper in the container I carry them in and one of those freeze packs beneath the container to keep them cool and not melty.

Nobody Else But Me

Alright. I’ve made my secret love confession about grapefruit. I hope I can live this down. But it really is a wonderful fruit. One thing that bugs me about all the grapefruit on this planet though, is that there are different varieties in the grocery store all the time and I never notice what that means until I get home and slice them open. I usually find the variety I’ve brought home has a really thick rind, or the fruit inside isn’t as red as I imagined. In the end, there is only one kind that I like, that gives me that ‘nobody else but me’ feeling. I think my favorite kind of grapefruit is definitely pink. Learn more about the other varieties in this quick and dirty article from boneappetit.com and save yourself the Genghis Khan-style raging over the brunch table with that spikey grapefruit spoon clenched in your fist, looking down at a half-eaten sour grapefruit you didn’t actually ask for.

As Thrall once said—I did not ask for this!

Ho my God, I just talked about Genghis Khan and Thrall in the same breath, mixing up real and imaginary warchiefs. That’s got to be a new record!

But seriously—have fun with your grapefruits, people. Whatever you, uh… do with them… Please use grapefruit responsibly.

The best part? Scyther and Butterfree make such a great couple #magfest2020
Aaah, the Kennedy Center! So elegant. So inspiring. Even down to my $4 adult sippy cup
These presents were wrapped really beautifully so posting them on instagram and stressing people out that this is a thing now. Ppl will either up their future wrapping game or re-wrap their presents now to compete, let's see what happens lolol oh right happy holidays!!
I NEVER post pictures of myself, but these came out really cute. No, I am not Simone Biles, and yes, Bulbasaur got me to smile that much!
This is the cutest notebook of all time. Meeting notes, shopping lists, chores... nothing I write in here can depress me! #ladygaga #marshalls
If I'm a stalker, ok you can tell me. But this pic I snapped of a stranger's shoes came out RAD and I am going to try and find out where they sell them... *Nancy Drew themesong*